The Department of Neurosurgery is dedicated to provide the highest quality care and achieving the best outcomes for patients with disorders of the brain, spine, and peripheral nerves. 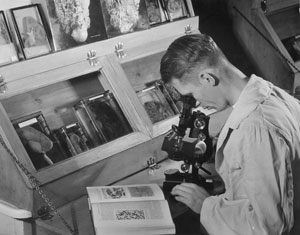 The present training program in neurosurgery at Wayne State University has a rich heritage, founded by Dr. E. Stephen Gurdjian in 1946 at Grace Hospital in Detroit. In 1900, Dr. Gurdjian was born in Smyrna, Asia Minor; he came to Michigan in 1920 where he entered the medical school at the University of Michigan. While at Michigan, Dr. Gurdjian worked with Drs. Carl G. Huber and Elizabeth C. Crosby, both legendary figures for their work in neuroanatomy. He graduated with his M.D. in 1926 and his Ph.D. in 1927; Dr. Gurdjian's doctoral dissertation, The Diencephalon of the Rat, continues to be sited in neuroanatomical papers to this day. Dr. Gurdjian then entered neurosurgical training at the University of Michigan under Dr. Max Peet, who had received his neurosurgical training from Dr. Charles Frazier at the University of Pennsylvania.

Following completion of this training, Dr. Gurdjian began his practice in the city of Detroit, with much of his work involving trauma at Detroit Receiving Hospital. It was during this period of Dr. Gurdjian's career that he made his major contribution to the treatment, understanding, and mechanics of head injury. To accomplish this, he aligned himself with Drs. Herbert Lissner, Lawrence M. Patrick and Voigt Hodgson, all of the Department of Engineering Mechanics at Wayne State University. This group went on to produce major innovations in the research of head injury, which in turn led to the improvement of care for the head-injured patient.

Dr. Gurdjian was the honored guest of the Congress of Neurological Surgeons in 1971, following his retirement as chairman in the previous year. At that time, his bibliography included 326 publications, a testimony in itself to his scholarly activities.

Dr. L. Murray Thomas, a former resident (1952-1960) of Dr. Gurdjian, succeeded him as Professor and Chairman in 1970. Previously, Dr. Thomas had served in the Army Air Corps in Europe during World War II, being discharged in 1946 with the rank of Captain. He completed his undergraduate education at the then-named Wayne University, gaining his BA in Chemistry in 1949. He followed this up with further study at Wayne, completing his medical school training in 1952, graduating with distinction.

Dr. Thomas continued Dr. Gurdjian's head injury research by collaborating with the before-mentioned engineer Dr. Hodgson. Dr. Thomas brought the Neurosurgery Department into its present microscopic realm, and was noted as a superb technician and clinician. Dr. Thomas also worked on a clinical study of extra-cranial cerebrovascular disease during his time in the department. Dr. Thomas has been awarded the Hektoen Medal from the AMA and the Gold Medal of the American Roentgen Ray Society for his work on vascular disease. He also served as Associate Dean for Hospital Affairs at Wayne State from 1972 to 1981.

Dr. Thomas was succeeded by Fernando G. Diaz, MD, PhD, in 1990 as Professor and Chairman. Under Dr. Diaz, the Neurosurgery Department achieved growth through increased use of new technologies available to the neurosciences. The number of cases for the department increased annually, as witnessed by the numerous presentations made by department members, nationally and internationally, each year. The number of faculty members in the department increased under the guidance of Dr. Diaz, to help the department expand into new clinical ventures, such as endovascular neurosurgery.

In 2001, Dr. Murali Guthikonda assumed the position of Interim Chairman, and was later confirmed as Chair for the Neurosurgery Department in 2005. Under Dr. Guthikonda's leadership, the department consolidated its base operations at the Detroit Medical Center. He guided the growth of the department by adding faculty in the areas of neuro-trauma, cranial nerve disorders, epilepsy, neuro-oncology, and interventional neuro-radiology. He oversaw the development of the Motor Skills Laboratory to complement work in the area of computer-assisted learning. The department established a presence at Huron Valley Hospital in Commerce, Michigan, while continuing its existing relationship with the Karmanos Cancer Center.

Dr. Sandeep Mittal became the Department's fifth chair in October 2015. With Dr. Mittal's leadership, the Neurosurgery Department at Wayne State University is looking forward to the future innovations and breakthroughs sure to appear in its clinical and research endeavors.